Hot Cross Bun Pound Cake – the second Easter recipe this week leading up to the long Easter Weekend. Why? Because I can’t get enough of the cinnamon, mixed spice, this time mixed with raisins, mixed peel and robed in a sour cream frosting.

This one also begins with the lack of a stand mixer to make hot cross buns. What came to mind was a hot cross bun inspired cake because I really like the flavour combinations. My kingdom for a Woolies extra spicy hot cross bun!

I threw this idea at my sister with a few alternative iterations and she fell on pound cake. Flavoured with spices but she didn’t like the idea of any added fruit. Well sissie – I added the fruit and it’s great!

Butter – Always makes it better. But you can use baking margarine if you want.

Caster sugar for sweetness, and a subtle sugar flavour as to not compete with the spices and fruit.

Eggs are used to bind the cake together.

Salt – this gives flavour to the flour and balances the sweet.

Cinnamon and mixed spice are what gives this cake its spicey-hot-cross-bun-Esque flavour.

Flour – just plain standard grade or all-purpose flour is what you need here.

Yoghurt adds a nice tangy dimension of flavour to the cake. This can be substituted with sour cream which is a traditional ingredient in pound cakes.

Raisins and Mixed Peel are traditional fruit additions to hot cross buns. While I didn’t want them in my hot cross bun cookies, a pound cake feels more adult and needs the fruit. BTW – I am now obsessed with mixed peel, what a great ingredient!

Creaming the butter and sugar until it is has lightened in colour and is fluffy in texture is a must for this recipe. The sugar crystals cut through the butter adding air and lightness. This will take about 5 minutes when using a stand mixer or electric hand mixer.

When adding in the flour – fold it in gently until just combined. You don’t want to overmix the batter as this will result in a tough dense cake.

This cake will keep at room temperature for 3 days wrapped in baking paper and kept in an airtight container.

Alternatively, you can keep the cake in the fridge wrapped in paper and in an airtight container for a week. 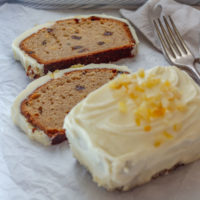