This easy homemade silky smooth creamy egg-free vanilla rice pudding is made from a few pantry ingredients, sweetened with condensed milk and cooked on the hob or stovetop.

This naturally gluten-free rice pudding is a hug in a bowl. It's everything you didn't know you needed for a fall or winter pudding. It's warm, comforting and creamy. And TBH - it's also really great cold!

Need a dairy-free or vegan rice pudding? Check out the variations below the ingredients!

I don't quite remember the origins of this particular recipe, except that I had a bunch of risotto rice in the pantry, and a hankering for a warm dessert on a cold Middleburg winter's evening. I plodded along in the kitchen, and over the years I have experimented with this recipe.

It was here in New Zealand that I opted to replace half the milk with water because I simply could not get the rice to soften up to my desired liking during the cooking phase. I put this down to perhaps having slightly different varieties of rice available here when compared to South Africa.

What is rice pudding?

Rice pudding is one of those dishes found across the globe, with hundreds of variants. This pudding typically consists of rice, milk, water, cinnamon, vanilla, raisins, and a bit of sugar for sweetness. Rice pudding can be made on the hob, baked in the oven as well as using appliances such as instant pots and slow cookers.

This recipe is made by cooking the pudding on the stovetop or hob. It was cooked up in the evening when the craving for something sweet yet comforting was needed. I mashed together a few rice pudding recipes and experimented with making changes here and there as I went.

My favourite variation of this dessert is my chocolate, which simply requires the addition of cocoa powder for a rich chocolatey flavour.

This is an egg-free rice pudding that can be made with condensed milk, or with sugar. This recipe can also be made vegan friendly.

Rice – I use arborio or risotto rice for this pudding, because it is starchy, which adds to the creaminess of the dish. I also don't rinse the rice.

Sweetener - this rice pudding can be sweetened with white or brown sugar or condensed milk. Either regular or "lite" condensed milk can be used in this recipe.

Milk and Cream give this pudding the silk smooth comforting creaminess. I usually use standard (whole) or trim (2%) milk and heavy cream.

The vanilla extract gives this pudding a rich vanilla flavour. Use the best you can.

The butter can be replaced with a vegan alternative or even vegetable oil.

For a chocolate rice pudding, add in a third of a cup of sifted cocoa powder when you add in the milk and sugar.

Raisins are commonly added to many rice pudding recipes, if you feel the need, toss in a cup of raisins or sultanas.

Add in additional spices such as cinnamon, nutmeg, cardamom or even a pumpkin spice mix to punch it up and make it your own.

A dairy-free or vegan rice pudding can be made by:

How to make rice pudding on the hob

Step 1 – Combine the rice, water, butter and salt in a large pot. Bring to boil and simmer until the rice has absorbed most of the water. This will take about 10 to 15 minutes.

Step 2 – Add the milk, cream, sugar or condensed milk, and vanilla to the rice. Simmer the mixture until the milk and cream has reduced and has been absorbed by the rice. Stirring every minute or so to ensure the rice does not stick to the bottom of the pot. This will take about 30 to 35 minutes.

Step 3 – Allow the pudding to cool, either in the pot or in a heat-proof container. But to prevent skin from forming on the rice pudding, take a piece of cling film or plastic wrap directly on the surface of the pudding.

Step 4 – Serve the pudding warm or cold, with a dash of cinnamon, some chocolate shavings, a dollop of jam and perhaps some fresh berries.

Store any leftovers (I mean if there are any) in the fridge, covered with cling film for 3 to 5 days.

Rice pudding is thought to have originated in China or India. This pudding is now found around the world, with every country having their own variation of the comforting pudding.

Can rice pudding be eaten cold?

Yes. This particular recipe is great warm and cold. I like to take the rice pudding out of the fridge and come to room temperature for a few minutes before tucking it into the delicious creamy pudding.

How is rice pudding cooked?

This particular recipe is cooked on the stove or hob, but rice pudding can be baked in the oven, or even cooked in an instant pot, crockpot or slow cooker. There is a multitude of recipes and cooking techniques.

Is rice pudding and tapioca the same?

Tapioca is a starch that is extracted from the roots of the cassava plant. Tapioca balls, are used to make tapioca pudding and can be made in a similar manner to rice pudding.

Rice is naturally gluten-free, and no ingredients used in this rice pudding recipe contain gluten (although please check your nutritional labels and manufacturing warning!) 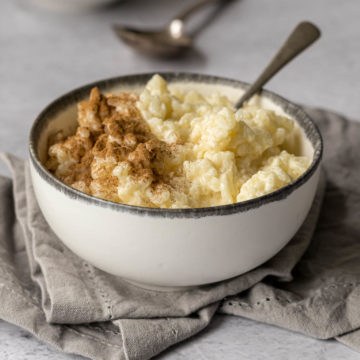 For a chocolate rice pudding, add in a third of a cup of sifted cocoa powder when you add in the milk and sugar.  Raisins are commonly added to many rice pudding recipes, if you feel the need, toss in a cup of raisins or sultanas. Add in additional spices such as cinnamon, nutmeg, cardamom or even a pumpkin spice mix to punch it up and make it your own.

Dairy-free or vegan rice pudding can be made by: