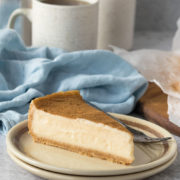 This easy, silky, smooth, homemade no-bake milk tart sits on a Tennis biscuit base, and is sweetened with condensed milk and topped off with cinnamon. A South African comfort dessert.

What is a Milk Tart?

Milk tarts or melktert (in Afrikaans) is a dessert that either has a sweet pastry crust or biscuit base, and a milk-flavoured custard filling that is topped with ground cinnamon. I would firmly place milk tart into the South African comfort food category.

The South African milk tart has its origins in the 17th-century Dutch Cape Colony (Cape of Good Hope, South Africa). It has most likely been developed from the  Dutch mattentaart.

My Traditional Milk Tart vs My No-Bake Milk Tart

Both of these melkterts are equally delicious. Yet, with a variation in flavour due to the sweeteners and cooking methods used.

Option 1 - Once the no-bake filling has been cooked, spoon it into a glass dish, cover it with cling film and allow it to cool until just warm to the touch before placing it in the fridge to cool and set completely for at least 4 hours or overnight.

For a boozier, quick and easy addition to any celebration try out my Milk Tart Shooter Recipe.

Tennis Biscuits not only make a perfect biscuit base but also invoke a nostalgic coconut biscuit flavour that all South Africans know and love. Tennis biscuits are coconut-flavoured tea biscuits. An alternative to Tennis biscuits would be a sort of plain Vanilla biscuit such as Marie Biscuits, here in New Zealand and Australia I would recommend using Krispie or Wine biscuits.

Butter - I used New Zealand butter in my recipes, which has approximately 82% butterfat and can be very yellow. Using a biscuit other than Tennis biscuits may require slightly less or slightly more butter to keep the biscuit base together.

Condensed Milk - this adds a secondary milk flavour as well as sweetness for this tart. If you don't want to use condensed milk and prefer plain sugar instead, replace the condensed milk with 130g (⅔ cup) plain white sugar, and increase the milk content to 850mL. This CANNOT be substituted with evaporated milk.

Cornstarch - also known as Maizena in South Africa and Cornflour in the UK, Australia and New Zealand. Keep in mind I am referring to the finely ground white cornstarch/cornflour.

Vanilla adds a nice vanilla flavour to the milk filling.

Eggs - I use large or number 7 eggs for this recipe. And find that 4 eggs is the perfect amount of eggs.

A note on eggs in milk tarts - many of the older recipes I have read and made in the past calls for the separation of the eggs. And then add the egg yolks and whipped egg whites separately to the milk filling. However, honestly, especially for this recipe, I would not bother going the extra mile.

How to Make a No-Bake Milk Tart

Step 1 - Make the Biscuit Base

Option 2 - Crushed biscuit base with butter.

Take a piece of square baking paper about 2 inches or 5cm larger than a 23cm springform tin. Crinkle the paper into a ball and then place it over the base of the tin. Press the paper into the corners of the bottom of the base (you may need an extra pair of hands here), before clipping on the sides of the tin.

Finely processor crushes the tennis biscuits until about 80% of the biscuits have a sandy texture. Then mix in the melted butter. Pour the mixture into the tin and press down tightly into the bottom, and up the sides (about 3cm or just over an inch). The sides don't need to be thicker than about 2-3mm. Place in the fridge for an hour.

NOTE - Finely processing the biscuits is a must for a really stable biscuit base.

Step 2 - Whisk together the eggs, water and cornstarch

Note - the order in which these are mixed is important as the cornstarch may be too thick if added in another order.

NOTE: The filling needs to be thick before pouring into or over the biscuit base. If it is not cooked enough, it will not be set in the fridge.

NOTE: If the filling seems to be a touch lumpy, simply press the filling through a sieve before adding it to the biscuit base.

Step 5 - Fill the Biscuit Base

Allow the milk to cool for about 5 minutes whisking occasionally and then pour it into the prepared biscuit base. If using loose biscuits, they may move around a bit during the process. Just use a fork to gently prod them back into place.

NOTE: If using the springform pan with a pressed-in biscuit base, spin the tin to evenly distribute the filling within the tin.

Cover the top of the filling with cling film or plastic wrap and allow it to cool until lukewarm at room temperature. Place in the fridge and allow to sit for at least 4 hours or overnight.

Gently remove the cling film and sprinkle with about 1 tablespoon of cinnamon. Slice, serve and enjoy.

The biscuits must be processed until you have a sand-like consistency in 80% of the biscuits. Trust me - I tried with a courser grind the biscuit base just does not support the filling.

The eggs must be beaten with water before you add the cornstarch. Adding the cornstarch any early can make it near impossible to mix the ingredients together (a little non-newtonian science fun?).

The filling must be cooked until it is thick but soft. The whisk should be leaving distinct indentations in the mixture before being added to the biscuit base. If it is not cooked enough it will not set.

A short note on the Original Recipe - I have updated my recipe since I first published it. I had two readers tell me that they could not get the filling to set, with other people telling me that they had a perfect no-bake milk tart.

So I decided to revisit the recipe and test it with less milk. If you liked the original recipe - this contained 850 grams of milk. And this has since been decreased to 720 grams of milk (3 cups) in the hopes of making this recipe foolproof. Please take note that this recipe works for me with 850 grams and 720 grams when the filling is cooked until it is thick and smooth.

This milk tart can be stored in the fridge for up to 5 days. Note on freezing - I have successfully frozen and defrosted this particular milk tart with little change to the consistency. Freeze for up to 6 weeks. Thaw the milk tart in the fridge (this can take up to 24 hours).

How is milk tart served?

Milk tart can be served as a dessert, by itself or with some tea and coffee.

Milk tart tastes similar to a custard tart or pie, but because of the higher milk-to-egg ratio has a milkier flavour.

This particular recipe is cooked on the stovetop, while my Traditional South African Milk Tart is baked in the oven.

What is the difference between condensed milk and evaporated milk?

Evaporated milk is fresh milk that has been heated until about 60% of the water content has evaporated. The cooking process here leaves a slight caramel flavour to the shelf-stable milk.

Condensed milk or sweetened condensed milk is fresh milk that has been heated until about 60% of its water content has evaporated and contains about 40 to 45% of sugar. This results in thick, sweet, shelf-stable milk that can be used in many desserts and drinks. 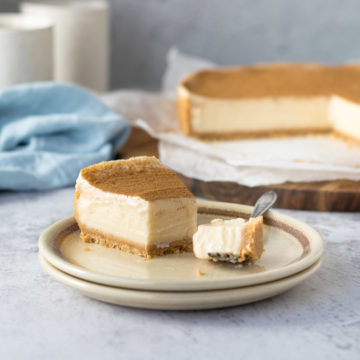 The biscuits must be processed until you have a sand-like consistency in 80% of the biscuits. Trust me - I tried with a courser grind the biscuit base just does not support the filling. The eggs must be beaten with water before you add the cornstarch. Adding the cornstarch any early can make it near impossible to mix the ingredients together (a little non-newtonian science fun?). The filling must be cooked until it is thick but soft. The whisk should be leaving distinct indentations in the mixture before being added to the biscuit base. If it is not cooked enough it will not set. This milk tart can be stored in the fridge for up to 5 days. Note on freezing - I have successfully frozen and defrosted this particular milk tart with little change to the consistency. Freeze for up to 6 weeks. Thaw the milk tart in the fridge (this can take up to 24 hours). The original recipe contained 850 grams of milk, but I have retested it with 720 grams of milk to make the recipe more foolproof.