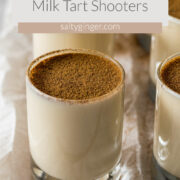 Melktertjies are a delicious, creamy, naughty milk tart liqueur. Reminiscent of a traditional milk tart - but with a kick.

So it’s not surprising at all that someone took this delicious dessert and turned it into a cocktail shooter.

Because of its popularity, a few companies jumped on the bandwagon and started to produce this shooter commercially. But none of them tastes as good as the homemade version. Of course, you can make it as strong as you like.

When are milk tart shooters served?

Well, anytime really. A celebration, a party, a braai (bbq). But let me set the scene…

The salads, potato dishes and braaibroodjies (basically toasted sandwiches made on the bbq) have been made. Someone is slicing the biltong for a snack. The meat is spiced and is sitting in its silver bakkie (metal roasting dish). The rugby match is now over, there were cries of celebration or the licking of wounds.

The fire has been blazing since half-time, but now everyone is huddled around standing in the smoke, sipping on their wine, whisky, or Klippies and coke (brandy and coke).

Music is playing in the background, people are laughing and talking. Then Kurt Darren comes on. Half the party roll their eyes, and the other half begins to sokkie. Before the first lamb chop hits the grill, shots are being poured and someone is yelling “waar is die kaneel?” or “where is the cinnamon?” before they hand out a round of melktertjies.

Sweetened Condensed Milk - this gives the melktertjies (or milk tart shooters) their creamy flavour and sweetness, which also cuts through the vodka. Condensed milk is basically milk that has been heated until 60% of the water has been removed, and sweetened with sugar. This creates a shelf-stable milk product.

Evaporated Milk - this adds a delicious slight caramel flavour and another layer of creaminess to the melktertjies.

Evaporated milk can be substituted with plain whole or full-fat milk, or even cream, or half-and-half. For plant-based or vegan versions simply use your favourite plant-based evaporated milk.

Vodka - here I would suggest using a vodka that you like drinking, and this recipe requires a plain, unflavored vodka. For this recipe, I chose the classic Swedish Vodka Absolut.

Ground cinnamon is used to top off this delicious milk tart shooter, and helps invoke the traditional milk tart flavour.

How to Make Milk Tart Liqueur/Melktertjies

In a mixing bowl or large jug, combine the condensed milk, evaporated milk and vodka. Mix all the ingredients together, and place them into a bottle. Chill the mixture for an hour or two before serving.

How to serve Melktertjies or Milk Tart Shooters

Fill the shooter glasses almost to the top with the melktertjie mixture. Then sprinkle ground cinnamon over the top and enjoy! This is the most common way in which the milk tart liqueur is enjoyed.

On the rocks...so we discovered

Once, some time back, I made a batch of melktertjies and left it in the fridge before we left for a weekend gathering. Which meant we had about a litre of this delicious drink between my husband and myself.

Now, we didn’t just sit down and knock back shots like 20-year-olds. Instead, we enjoyed this drink poured over ice with a dash of cinnamon on hot summer evenings, like sensible adults. Similar to how you would enjoy some Amarula or some Bailey’s.

Can I make melktertjies vegan-friendly?

Yes, this milk tart liqueur can be made using your favourite plant-based condensed milk and evaporated milk.

Can I make melktertjies ahead of time?

Yes, but I would recommend making them the day before the event and then storing them in a sealable bottle or jug in the fridge. 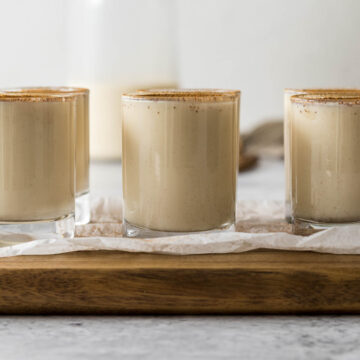 The amount of vodka you add to this mix can be anywhere between 300 - 400ml, this is dependent on how sweet or how much of a punch you want the shooter to have.