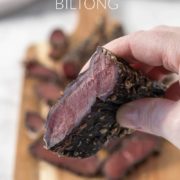 Biltong is a dried, cured meat that originated in Southern Africa. It can be made from a variety of types of meat such as beef (which is the most common variety you will find in South Africa), as well as game meats such as kudu or ostrich.

The word "Biltong" is most likely derived from the Dutch words bil which means "buttock" and tong which means strip.

The buttock refers to the "round" cut of beef, which is the cut of beef that, is also known as the "topside" and "silverside".

Walking into a butchery in Southern Africa and asking for biltong you will probably be met with the following questions:

But then how do you eat biltong? Well, it's usually eaten as slices for a snack. But biltong can also be added to stews or potjies (a biltong potjie is super delicious!), savoury muffins, and bread, and can even be used to make sandwiches.

Traditionally biltong was made during the cold dry Highveld winters. The Highveld refers to the inland plateau that consists of the Free State, Gauteng and portions of the Eastern Cape, Northern Cape, North West, Limpopo and Mpumalanga.

The strips of beef or venison would be sliced against the grain and cured with salt and spiced, before being hung in a cool dry area to dry completely. The cold dry air of the winter months of the Highveld allowed the meat to dry out quickly, with a lower risk for the growth of mould and bacteria.

Today, biltong is made throughout the year, using a variety of methods. Many butchers across the country will have a space dedicated to making and drying biltong. Each butcher will generally have their preferred method of curing the meat and drying the meat.

Because biltong is now throughout the year, many will rely on fans to blow on the meat strips to enhance the drying process.

Typically homemade biltong is dried in a biltong cabinet. The Mellerware Biltong King is one of the more popular commercial cabinets you can buy. However, if you are looking into making your own cabinet I highly suggest visiting Reddit's Biltong Community.

This community of 13,000 plus members not only discuss different biltong recipes, but here you will also get a feel for homemade biltong cabinets. These can be made out of wood, or even a plastic tub, and consist of a light bulb and a computer fan for ventilation.

Beef - typically the beef used for biltong comes from the round (as seen in the diagram above), this is also known as silverside or topside. However tenderloins, sirloin and rump can also be used.

Vinegar - we tested both malt and red wine vinegar, both make really good biltong. The malt vinegar has a more neutral flavour while the red wine vinegar really stands out as a separate flavour profile.

Flakey Sea Salt - we tested 2%, 2.5% and 3% salt (w/w) during our recipe development and highly recommend falling somewhere in the 2.25-2.5% salt. We also tested coarse salt vs flakey sea salt and flakey sea salt won. Why? because it grinds down easier in the mortar and pestle which lends to an evenly seasoned piece of meat.

Note - if you are looking for high-quality local sea salt in New Zealand, I highly recommend Opito Bay Salt!

Coriander and peppercorns for that deliciously seasoned flavour that we know and love.

Brown Sugar for the vinegar wash adds a touch of caramelised flavours. We did also test a batch with honey, but I found there was a definite hint of honey (which is not a bad thing!). But if using honey then stick to malt vinegar!

Step 1 - Toast the coriander and black pepper until browning, fragrant and smoking a tiny bit in a dry pan.

Step 2 - Place the coriander, pepper and sea salt into a mortar and pestle and grind until about 50% of the coriander, and black pepper are mostly powder-like. Set aside.

Step 3 - In a small bowl, combine the vinegar, Worcestershire sauce and sugar. Stir until the sugar has dissolved. Set aside.

Step 4 - Cut the meat along the grain into 3cm thick strips.

NOTE - see how to make biltong in a dehydrator below for additional instructions on thickness.

Step 6 - Sprinkle the meat with the coriander mix on all sides. Cover the glass dish in cling film or plastic wrap. Place in the fridge for 24 hours. The meat can be flipped over at the 12-hour mark.

Step 7 - Set up the biltong box. I like to line the bottom with baking paper and a paper towel to catch and absorb juices that may drip off. Place a hook into each piece of the meat and hang it to dry in the box for 2 - 7 days, depending on how dry your want the biltong.

NOTE - Roughly 2 days for soft, wetter biltong, about 3-5 days for medium, and 4-7 days for drier biltong. You may need to experiment with your particular setup. Really thick pieces may take up to 2 weeks to be ready.

Making Biltong in a Dehydrator

We decided to do a test run of biltong in the dehydrator as an alternative to the cabinet.

We have the Ezidri Home Dehydrator, which means we were limited in the thickness of the biltong we could make. And cut the meat slices about 1.5-2cm thick and about 10cm long.

Basically, follow steps 1 - 6, taking into consideration how thick and long to cut the meat to fit into your particular dehydrator.

NOTE - If you can place thicker pieces of meat on your dehydrator trays, you may need to run the dehydrator for up to a week at the lowest temperature setting. Just like when using a biltong box, you may need to experiment with your setup for the best outcomes.

A Note on Humidity and Mould

When the weather is warm and humid, there is a chance that mould (white dots or furry dots) will appear on the meat. This is why it is important to check on the progress of the biltong every single day.

At the first sign of mould, take a clean cloth or pastry brush and dab and wipe off the mould. All the specks of mould need to be removed or the mould will spread again.

However, if you notice that the mould has spread and covered most of the biltong, it will need to be discarded and thrown away.

A word of caution - we live in Christchurch, New Zealand, where it is fairly humid most of the year. We switched off our box for 24 hours in one of our test batches, but left the meat hanging and the very next day we saw specks of mould all over! Consider that a lesson learnt!

A Note on Air Flow

Too much airflow will result in a thick, hard casing (black portion or ring around the biltong). This means that the middle of the portion of the meat may not be able to dry out. Test your product by slicing off the bottom, if the casing is hard and the middle is too wet, the airflow needs to be turned down.

Bilting should be stored in a well-aerated cool, dry area as whole pieces. Sliced or cut biltong must be stored in paper bags, in the fridge. This allows the moisture to be removed which prevents mould.

How long can I store biltong? Well, in my house I have never seen biltong last longer than a week! Because it's just too delicious. However, in a cool, dry environment it should last 4 to 6 days before mould begins to appear. This is dependent not only on how the biltong is but the environment in which it is stored.

Use your best judgement! 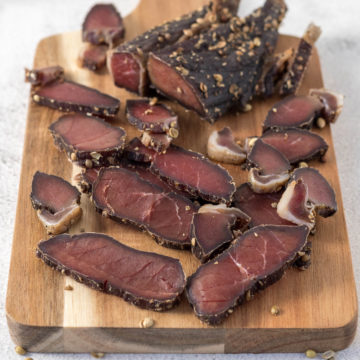