Traditional South African Milk Tart (melktert) with a homemade crust, and a silky smooth filling, baked to perfection and sprinkled with ground cinnamon. Milk tarts are comforting, delectable, and when you are living across the globe - nostalgic.

What is a milk tart?

Milk tarts or melktert is a dessert that consists of a sweet pastry crust and a custard filling that is made from milk, eggs, sugar, and flour. Milk tarts have a higher ratio of milk to eggs than other custard tarts like the Portuguese Custard Tart (Pastel de nata).

The milk tart as we know it today originated among the settlers in the Dutch Cape Colony (Cape of Good Hope, South Africa) in the 17th century. This tart was most likely developed from the Dutch mattentaart which is a sort of cheesecake-like dessert.

For my milk tart, I opted for a shortcrust type pastry, because I feel like this would have probably been the quick and easy go-to for most households and a biscuity-type crust is how I know milk tart. And then I picked the combination of stovetop cooking plus baking.

What You Need for this Recipe

This recipe requires a few mixing bowls, a pie plate or a pie dish (I use a pyrex  24cm deep-dish pie plate which takes approximately 1 litre of liquids).

For this recipe - the plain flour can be substituted with self-raising flour with no additional baking powder needed.

Milk tarts can be made with a variety of different types of crusts. This is all dependent on what your personal preference or time constraints dictate. Crusts can consist of:

My personal favourite is cooked and/or baked milk tarts. Nothing beats the traditional flavour.

Growing up, this was the only milk tart my mother used to make. I'm guessing it was to save time and energy. During my life, I have tried many crustless milk tart recipes and have never really been happy with the outcome.

However, I was very pleasantly surprised when during my testing phase I baked the excess milk tart filling in a glass dish without a crust. The perfect crustless milk tart - the trick is to just make the filling in the same manner and skip out the crust!

For a boozier, quick and easy addition to the celebration drinks - check out my milk tart shooter recipe!

I did a deep dive into many old milk tart recipes. These were clearly published exactly as they were found in the handwritten recipe books of the Ouma's and Tannies (Aunties) because the details were few and far between.

After reading numerous methods I pieced together what made logical sense to me, forged ahead and was very surprised by the ease of this crust and how well it turned out.

This milk tart crust is similar to the shortcrust pastry - but it's not a shortcrust pastry. It's a short-cut pastry (pun intended). This crust starts with the creaming together of the butter and sugar (yip, no cold butter, no rubbing it in the flour or cutting it through using a food processor). Then an egg is added and beaten into the butter mixture before adding in the flour, salt and baking powder.

The next step is that you sort of knead the dough together (about 5 to 7 times) until you have a sugar cookie type consistency.

Traditionally, this dough was then broken off into cookie-sized chunks and pressed into the bottom and sides of the pie plate. And smoothed out by pressing a knife into the pastry (I used the bottom of a measuring cup and my hands).

I also tried a slightly different method. I rolled out the pastry until it was about 5mm in thickness and transferred it to the pie plate. The dough did break, so I patched it up using excess chunks and it worked out great. It looked a little more refined than pushing the dough into the plate and allowed me to control the thickness better.

Whisk together the sugar, flour, cornflour, and salt to get rid of any lumps. Bring the milk with the cinnamon sticks to a boil. Just as the milk comes to a boiling roll, reduce the heat to a simmer and whisk in the sugar-flour mix.

The milk mixture is cooked on medium heat for about 10 to 15 minutes stirring consistently. This will prevent any lumps from forming. When the milk has reached the consistency of a bechamel sauce, remove it from the heat and add in the butter, whisking to combine.

Allow the milk tart mixture to cool for about 10 minutes, whisking it occasionally to prevent skin from forming. Remove the cinnamon sticks. While the tart is cooling, beat the eggs and vanilla together until they are light, fluffy and about 4 times in volume. Then add these eggs to the milk, mix thoroughly and pour into your pie crust to bake.

Cover the milk tart with tin foil, tented in the middle so that it doesn't touch the filling, and bake for 30 minutes, remove the foil and bake for an additional 20 minutes until your crust is deep golden brown. The foil prevents the crust from browning too early in the baking.

A note on eggs - some of my old recipes call for the separation of the eggs, adding the egg yolks to the milk mixture and whipping the egg whites to a soft peak before adding to the milk. This is an optional additional step you can take when making this milk tart.

Bakeware: Metal bakeware is superior when it comes to baking biscuits, cookies, brownies, muffins and quick bread, scones, cakes. These heat up and cool down faster than glassware. Glassware is heavier, heats up and cools down slower than metal and are more suited for bread puddings, pies, crisps, crumbles and cobblers.

All my recipes are currently tested at sea level.

Store this milk tart in the fridge for up to 5 days.

What is milk tart made of?

Milk tarts or melktert is a dessert that consists of a sweet pastry crust and a custard filling that is made from milk, eggs, sugar, and flour.

What to serve with milk tart?

Milk tarts are typically served as dessert, or as a treat with tea.

Milk tarts taste similar to custard tarts or pies, however, due to the higher milk to egg ratio, they have a milkier flavour with hints of cinnamon and vanilla.

What is a South African milk tart?

Milk tarts or melktert is a dessert that consists of a sweet pastry crust and a custard filling that is made from milk, eggs, sugar, and flour. Milk tarts have a higher ratio of milk to eggs than other custard tarts like the Portuguese Custard Tart (Pastel de nata).

The milk tart as we know it today originated among the settlers in the Dutch Cape Colony (Cape of Good Hope, South Africa) in the 17th century. This tart was most likely developed from the Dutch mattentaart which is a sort of cheesecake-like dessert.

Does milk tart have eggs?

Yes - eggs in the milk tart assist with the setting of the filling during the cooking and/or baking process.

Milk tarts can be cooked entirely on the stovetop, while others are cooked and baked in the oven. 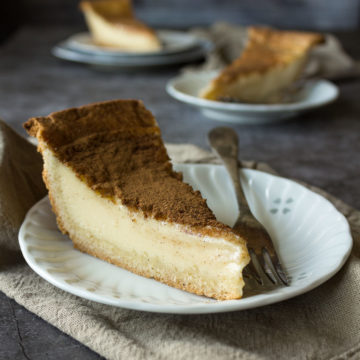 For fan-forced or fan-assisted ovens decrease the temperature by 20°C/25F. Milk tart crust - you can use puff or flakey pastry for a milk tart. I have seen this in one or two recipes when researching milk tarts.  Crustless Milk tart is also possible using this recipe. During my testing phases, I had a bit too much filling so I popped it into an oven-safe dish and baked it up for 20-30 mins and was very happy with the results.  Egg whites can be separated from the yolks and whipped to soft peaks before addition to the milk tart. This is a common method among many traditional recipes.  On pie plate size - this recipe has been adapted to fill a 24cm deep-dish pie plate, that takes approximately 1 litre of liquid filling, which is common here in New Zealand, Australia and North America. Traditionally, the South African pie plate used for milk tart is shallower and a touch smaller than what is found here.  I used a 9-inch pyrex pie dish.