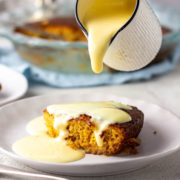 This soft, smooth easy homemade malva pudding is flavoured with apricot jam and drenched in a rich cream sauce while it is still hot. Serve it with custard, cream, or ice cream!

Malva pudding is a quintessential sweet, comforting South African pudding. Every family and every South African cookbook has a Malva Pudding recipe. But let me tell you, once you have tried this recipe you will never look back. This easy malva pudding recipe is hands down the best you will ever make. I have this on record from friends and family.

You can walk into any supermarket in South Africa and buy a ready-made version, and this dessert can be found on menus in restaurants across the country. I won’t lie. I do miss popping into my local Woolies, picking up a meal, a malva pudding, some fresh custard, and a bottle of wine. But honestly, this recipe is worth it!

Where did Malva Pudding originate?

There are a few origin stories regarding this pudding. The first being that it comes from the Afrikaans word malvalekker which means “marshmallow”. The similarities between the texture and resemblance of the pudding to that of a marshmallow. I mean – the pudding is soft and spongy and sweet but I don’t personally see the resemblance.

The second theory is Malva is Afrikaans for geranium. The leaves of the geranium may have been used to flavour the pudding batter.

A third theory is that the sauce for the original pudding was made using Malvasia (malmsey) wine which may have then been replaced with brandy and sherry years later. Or, the pudding was just paired with Malvasia wine.

What you need for this recipe

Making the Best Ever Malva Pudding

Step 2 - Place the sugar, apricot jam, and eggs in a bowl and beat until light and fluffy. This can be done either with an electric whisk, by hand, or even using a stand mixer (about 3 to 4 minutes).

Step 3 - Sieve the flour, baking soda, and salt into the egg mixture. Mix until just combined.

Step 4 - Either in a small saucepan, or a microwave-proof bowl or jug, heat together the milk, butter, and vinegar, mixing until combined. The mixture will curdle. This is fine.

Step 5 - Add the butter mixture and whisk until a smooth batter forms. Scrape down the sides of the bowl and make sure everything is well combined.

Step 6 - Place the batter into the glass or ceramic dish. Cover with the dish's lid or with tin foil. Bake for 20 minutes before removing the lid or tin foil cover.

Step 8 - During the last 10 minutes of the sponge baking, combine all ingredients in a saucepan. Stir the ingredients over medium heat until the butter is melted and sugar is dissolved, and the sauce is heated through.

Step 9 - When the pudding is cooked, remove it from the oven. Pour all the sauce over the hot pudding. At first, it will look like there is too much sauce, but it will be rapidly absorbed into the sponge.

The malva pudding sponge must be covered either with tinfoil or a lid in the first 20 minutes of baking. This makes sure that the top of the pudding does not brown too quickly, which will impede the rising of the batter.

The sauce must be poured over a warm pudding straight from the oven. At first, it will look like there is too much sauce, but trust me, it will quickly be absorbed by the sponge.

Apricot jam: traditional flavour profile for the Malva sponge, however, if you need a substitute for the apricot jam - I have used honey or maple syrup in a jam (pun intended) with great results.

Baking soda: the preferred leavening agent because vinegar is used. If you do not have baking soda, replace it with 3 teaspoon of baking powder and leave out the vinegar.

Evaporated Milk can be substituted with cream.

Water can be substituted (or part of the water, depending on how boozy you want the sauce) with brandy or sherry.

This pudding can be stored covered in the fridge for 4 to 5 days. However, I doubt this pudding will last that long.

Can I make Malva pudding with Evaporated Milk / Ideal Milk?

Yes. Evaporated milk can be used to make the Malva Pudding sauce instead of cream.

Can I make Malva Pudding without apricot jam?

Yes. I have substituted the apricot jam with honey or syrup in a pinch.

Can I make Malva Pudding without cream?

Yes. The Malva Pudding sauce can be made with evaporated milk instead of cream.

How to make Malva Pudding without bicarbonate of soda (baking soda)?

Yes. Traditionally Malva Pudding is made with bicarb and vinegar, however, baking soda in this recipe can be replaced with 3 teaspoon of baking powder and the removal of vinegar in the recipe. 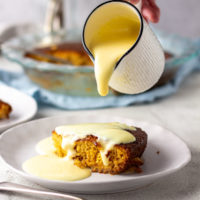 Apricot jam: traditional flavour profile for the Malva sponge, however, if you need a substitute for the apricot jam - I have used honey or maple syrup in a jam (pun intended) with great results. Baking soda: the preferred leavening agent because vinegar is used. If you do not have baking soda, replace it with 3 teaspoon of baking powder and leave out the vinegar. Evaporated Milk can be substituted with cream. Water can be substituted (or part of the water, depending on how boozy you want the sauce) with brandy or sherry NOTE - the pudding must be covered for the first 20 minutes of baking to ensure a brown crust does not form too early, impeding the rise of the sponge. For fan-forced or fan-assisted ovens decrease the temperature by 20°C/25F.